In 2016, Ljubljana was the winner of the European Green Capital. The city made a large-scale transformation of their urban mobility systems by providing public transportation and cycling roads. Three-quarters of Ljubljana are green areas, filled with contiguous aquatic, forest and agricultural areas.

Slovenia is the third most densely forested country in Europe, and one of the richest European countries in terms of rivers and biodiversity. This is why a lot of importance is placed on nature conservation within the country and its cities. The initiative below, outlines some projects to further conserve nature and heighten biodiversity in the land- and cityscapes of Slovenia.

For more information, check out the Life Naturaviva Initiative

Additionally, Ljubljana was successful in implementing measures towards a healthier environment, listing the city’s traffic regime, the quality of water and a zero-waste strategy.

Ljubljana is the political, administrative, cultural and economic centre of Slovenia and is home to over 280,000 inhabitants. Ljubljana impressed the Jury by the significant transformation which has been made by the city in sustainability over the previous 10 – 15 years. This transformation has been achieved in areas including local transport and the pedestrianizing of the city centre. From being a city which was previously dominated by car transport the focus is now on public transport and on pedestrian and cycling networks. The most significant measure that has been taken has been the modification of the traffic regime on the main traffic artery (Slovenska Street).

Progress has also been made in preserving and protecting the green areas which characterise the city and in the revitalisation and transformation of brownfield spaces. Ljubljana has also demonstrated how they have progressed in terms of the treatment of waste and waste water. They have committed themselves to pursuing a zero waste objective. In addition to this the Jury recognised the example Ljubljana has shown by sharing its experiences and solutions in managing natural disasters. This was demonstrated in recent times by its work with the Balkan Region during the recent flooding crisis.

Three quarters of the entire territory of Ljubljana are green areas. These areas include contiguous aquatic, forest and agricultural areas. Ljubljana has implemented numerous urban green measures over the past decade including the planting of more than 2,000 trees, the building of five new parks and revitalization of the embankments of the River Sava. The largest of these parks is the Path of Memories and Comradeship. It is the longest tree-lined avenue in the city, with 7,000 trees and numerous memorials, rest points and other features. In addition, in 2010 the Slovenian city declared 1,400 ha of the territory as forest of special purpose in being valuable as a CO2 sink. 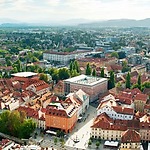 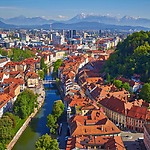