In this article, we share the story of design research of the Vergroening Kwakersplein Project in Oude West, as told by Gebiedscoördinator Frans Vlietman and Gebiedsmakelaar Jessica ter Maat.

What was the main reason for starting this research through design project?

Frans: The starting point of the case was the lack of trust that residents had in the government.

Jessica: The residents of the neighbourhood felt themselves isolated from the decision-making processes. The attention by the city council was going to big parties like food service or corporations. On the other hand, the Kwakersplein was unliveable, with only big trucks passing in between. The creation of two kiosks was planned, but the residents were not involved in deciding to build those kiosks.

Frans: In the 90’s the municipality had agreed that every decision making about the neighbourhood would be first discussed with the residents. But in time, this agreement was forgotten by the municipality. As members of a Gebiedsteam, we made the residents go from complaining to doing. We wanted to assist them with their own place making!

Why did you choose this approach?

Frans: Place making is a new way of working. If you want something, make a plan and do it! In overheidsparticipatie we just help to design the process (if needed), the rest is up to the residents. But in order to do this, first we had to get the residents’ trust.

How did you start?

Frans: It took a lot of negotiations, especially about the two kiosks. The situation was that the residents never wanted a kiosk in the square, so at first, they were busy with stopping the construction of the first one by suing the municipality. In the meantime, the neighbourhood management (Bestuur) gave permission to the kiosk owner to build a second one.

Jessica: So, the first thing we did was to solve the problem of kiosks. We talked with the owner of the kiosk, and also brought the residents together to talk to them.

Frans: Then, the things got confusing because the kiosk owner decided to sue the municipality because they revoked his permit to build the second one!

What was the crucial moment in the trajectory?

Frans: We talked with the people on what they really wanted. They told us that one kiosk was okay if it was not built in the middle of the square. But they did not want a second one. Then, we explained the situation to the kiosk owner and discussed about how to solve this problem. Luckily another place was found for the second kiosk to be built, so we arranged that. And then we went back to the people to ask if they would be okay with this.

When the people saw that we turned the situation around, the world opened! There was an energy of change and people started to trust us. Then it was possible to start with place making. What we wanted was the people to stay from the beginning until the end, unlike following a normal process where you design everything for the others.

How did you develop it?

Jessica: Everything had to happen very fast because we had funding coming that had to be spent within that year. And we were already in July when the negotiations ended! If we did it in the government way, it would have taken over a year.

Frans: Frederike organised a workshop before the competition. She, Jessica, and the project leader Liane invited residents from the neighbourhood and asked them, "if you dream about a green square, what do you see?” People wrote down on post-its. Then three groups were made in the workshop and each group was matched with a designer. Later on, these became two groups with two main designers.

Jessica: The second meeting was about the presentation of the two designs. The people looked at each design and voted. The winner design won with only one vote difference. Because of this, the residents who were supporting the losing design got very angry, especially because they were the ones living around the square!

Frans: When this situation happened, some of the residents moderated the situation, so they found a way to figure it out themselves!

What did you learn from this experience?

Frans: It is very important to have a project leader from participation background, who knows how to talk and organise the people. In such intervention, the organisers should do a few things: Get the people together (1), Create design groups (2), and get the biggest activitists from the neighbourhood involved (3)! In the end, it was all about making the people heard.

How do you see the result?

Jessica: It was beautiful, during the summer it was awesome!

Frans: It also adjusts to the seasons.

Jessica: In all seasons there are plants and they are different. This is what the municipality by itself could not do. They always use the same sorts of plants, while people wanted also other things. They even agreed that they would take care of it!

What do you think about the future of these initiatives?

Jessica: There are not many other initiatives like this in this Stadsdeel, but I believe that this approach can one day grow again. You need to see the bigger picture, it is not only about green, design but how you live with each other.

Frans: Ownership of public space by residents is what we have to strive for, that's place making. If we want more ownership of the public space than we have to trust residents more in what they are capable of, share our vision about to set up public space with theirs. Don't be afraid of emotions that comes up. Talk and listen. As Gemeente we see this project as something we can hold on to, however the people look at what is happening today. 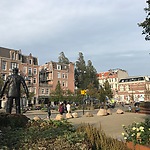 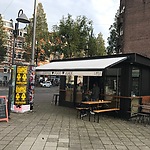 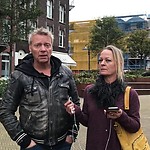