Perspective Brussels is young institution, established in 2016 as a public special agency for strategic spatial planning. Several expertise is combined on strategic planning (such as architecture), to better understand the city today. The strategy for Brussels Capital Region is developed within regional borders.

Brussels Capital Region has a population of approximately 1,5 million inhabitants and a wide commuting pattern. Half of jobs are occupied by commuters. Neighborhoods in city center have high density, districts in outskirts have less density. Brussels Capital Region has made comparison with Metropolitan Areas of Paris and Amsterdam. Brussels has much built area, likewise as Amsterdam. Brussels foresees a rapid growth of population, with a bit less speed for the upcoming period. The Strategy Regional Development Plan has been made when the Brussels Capital Region was booming at that time. Unique quality of Brussels are the international service city, which attracts people, keep social structure and diversity. Monitoring and implementation will deliver the thematic reflection on urban density.

Three topical themes for Brussels are agriculture, circular economy and security. The urbanization strategy focuses on neighborhoods for providing the public amenities, zero pollution. Priorities of Brussels Capital Region are housing, quality of life, economy and mobility. Priority on housing will develop public dwellings, needed by densification. Brussels faces a shortage of affordable housing, also for middleclass inhabitants. Priority on economy will develop productive city. Priority on mobility will reduce the place of car and leave space for pedestrians, develop transport network and promote the bicycle.

Key issue is the recognition of the functional area, also in the SURE and by the EU. Priority of Brussels Capital Region for the SURE region is sustainable mobility (project STISE). On the middle term the SURE Eurodelta may be recognized as macro region. There is opportunity of funding by Interreg or related pilot project/activities to EU territorial agenda with main objectives: Just Europe and Green Europe (more focus now on implementation). 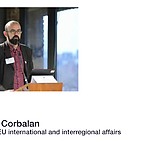