Roboat is the world’s first major research program on autonomous floating vessels in metropolitan areas. It allows for creating dynamic infrastructures, transportation of goods and people, and environmental sensing on Amsterdam’s canals. After working on 1:4 and 1:2 scale prototypes in the first three years of research, we are now working on the full-scale prototype.

While the first prototypes of self-driving cars are taking to the road, Amsterdam ushers in a new chapter in the international push for autonomous vehicles. Roboat is the result of innovative large-scale research that explores and tests the rich possibilities for autonomous systems on water. It represents a fantastic opportunity and privilege for the city of Amsterdam to have the world’s most prominent scientists work on solutions with autonomous boats - especially in a location where water and technology have been linked for ages.

Roboat is a joint research program of Massachusetts Institute of Technology (MIT) and Amsterdam Institute for Advanced Metropolitan Solutions (AMS Institute). The City of Amsterdam, Amsterdam’s water company Waternet and the City of Boston are supportive of the 5-year program. The novel robotic boat is easy to manufacture, highly maneuverable, and capable of accurate trajectory tracking in both indoor and outdoor environments.

The project allows for innovations in various domains, stands strong with top research and knowledge expertise and receives univocal support. Areas of innovation are for instance assembly, sensing and waste removal. The principal investigator and professor of MIT Carlo Ratti highlighted the dynamic and temporary floating infrastructure such as bridge or stages that can assemble on demand in a matter of hours.

Roboat offers enormous possibilities in terms of environmental exploration and sensing. Roboats could also clear the canals from waste. The floating dumpsters can play a key role in source separation when other types of waste are added to the equation. Since the current paradigm requires that residents take different types of trash to distinct locations, the inconvenience and complexity frequently result in lower recovery rates for recyclables and environmentally harmful waste. In response, Amsterdam is keen on significantly improving waste separation rates by 2020.

Roboat uses Laser Image Detection and Ranging (LiDAR) data for localization and mapping, as LiDAR data is more direct and robust and localization needs an offline cloud map, because mapping must occur before localization.

The first prototypes of Roboat were tested in the waters of Amsterdam in 2017 where a workshop was hosted in the fall to mark the end of the first project year. The event built connections and shared progress with members of the Amsterdam academic, industry and public communities and facilitated conversations and collaborations with AMS Institute researchers.

In October 2018, a large Roboat demonstration was held and small-scale prototypes were tested on the waters of the Marineterrein Amsterdam, AMS Institute’s new location. For a city that is so closely built to the water, this showcase project clearly illustrates a natural fit with the institute. Now in 2020, the team is working on the full-scale prototype in the garage of AMS Institute, right next to the waterfront of Marineterrein Amsterdam.

Beyond Amsterdam, the proposed fleet of waste-collecting vehicles has the potential to provide infrastructural improvements in other water-based cities, where the need for a nimble waste collection system is even more dire. 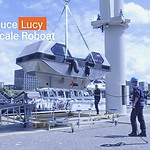 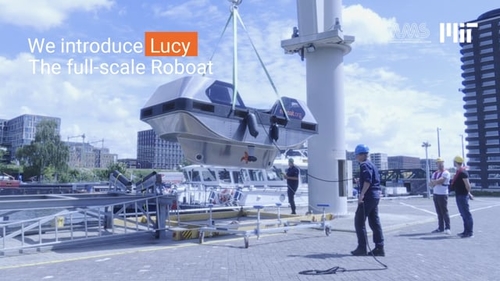 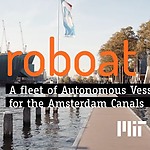 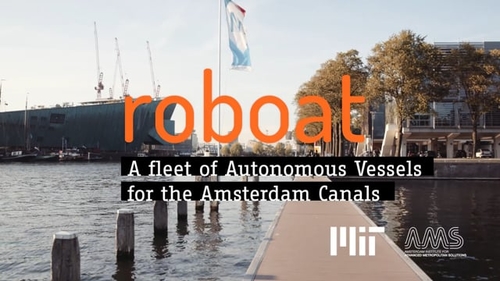