For our presentation that is dependent on sound and audiovisual material we felt a static presentation will not convey the work adequately. So we created a short movie that you can watch on Vimeo (see link below).

Our research progressed organically; the team was built as the ideas of what was needed to be explored emerged. The first members were Huda AbiFarès (typographer) and Mohamed Gaber (multidisplinary artist/designer) who wanted to explore developing an asemic and responsive script that speaks on an emotional level across living species. Since the project was veering towards an audiovisual language, the organizers of the Exploratorium introduced them to musician Michel Banabila. The three-person team was again expanded after discussion about what the sound should be and what the topic of the project could be. The curators then introduced the team to researcher and physicist Fantina Madricardo who was involved in a project on noise pollution in the Venice lagoon. As the discussion evolved, Fantina suggested we invite marine biologist Marta Picciulin who was recording the sounds of marine life in the Venice lagoon and the Adriatic sea.

The team was then perfect with the contribution of each member adding their expert knowledge and giving the artistic and hypothetical exploration a sound (no pun intended) scientific base. The project became more geared towards the aspect of sound, its symbolism and communication potential across species. The visual script and the immersive environment we set out to create became totally dependent on the sounds created by Michel that were inspired by actual sounds from the marine environments shared by Fantina and Marta, interlaced with human speech and constructed from various human languages.

In the short movie we share with the audience the various components of the research and our blueprint for a further development of the project and its potential execution. We hope that this exploration can continue and lead to an immersive and interactive art installation that brings empathy and awareness about sound pollution and its detrimental effects on marine life and ecology. We hope it will give voice to the underwater creatures and highlight the importance of developing a healthy balance between human modes of life and the fragile natural habitat that surrounds us.

Underwater sounds of the Venetian lagoon recorded by: 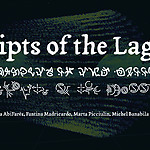 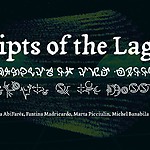 Scripts of the Lagoon